Rats and Mice in Dublin – Common Types of Rodents 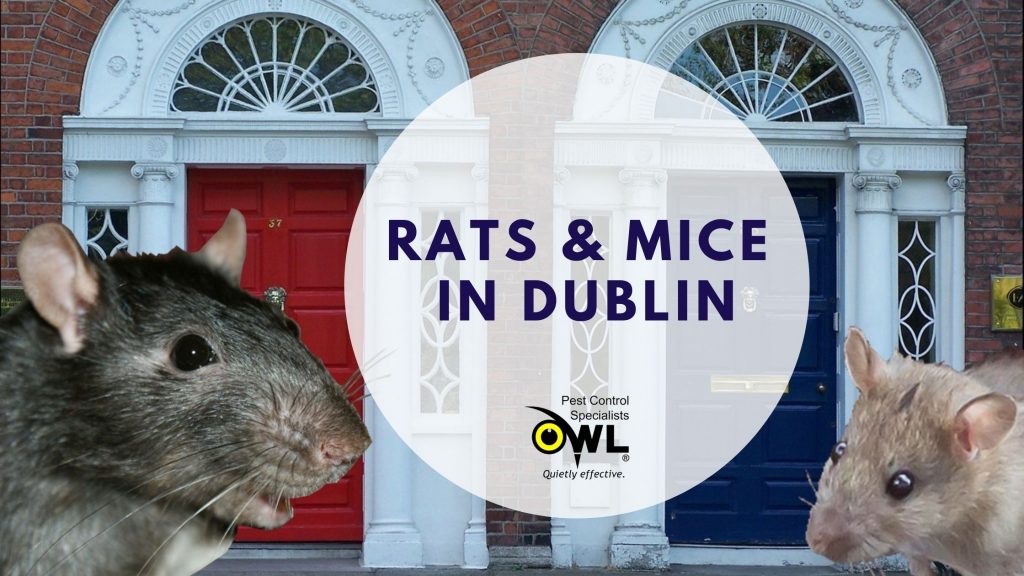 You probably loved Minnie and Mickey Mouse as a kid but now that you are an adult, the last thing you want is the idea of sharing your Dublin home or business with rats and mice.

It is understandable that most people have an inherent fear or dislike of these tiny creatures. After all, everyone knows the dangers and risks they pose to humans, pets, other animals, properties and the environment as a whole.

There are many different species of rodents in Ireland including rats, mice, shrews, voles and squirrels. Some rodents play a vital role in the overall health of forests and grasslands. They also serve as the primary source of food for most scavengers and predators such as foxes and birds of prey.

But some other of rodents, specifically the non-native species like the house mice and Norway rat, become pests once they infest homes, destroy properties, and threaten the health of the general public. They can destroy and damage food supplies, critical habitats, crops, native animals and plants.

Which is Worse – Mouse or Rat?

No one wants to deal with a rodent infestation. After all, these small and nasty creatures can destroy your house or important belongings and spread various diseases and illnesses. Seeing mice and rats scurrying around your home or business space is a true nightmare that came to life.

Which is the worse of the two: mice or rats?

There are several types of rodents in Ireland. However, the House Mouse and the Norway Rat (which can become very aggressive once established indoors) are responsible for most common issues in our homes.

However, it doesn’t really matter whether you are dealing with mice or rats as both of them can potentially carry and spread various diseases, some of which can even be fatal to humans. Rats and mice alike are also the culprits behind some dangerous allergies that many people suffer from.

Damage to food and buildings

Contamination of Dublin homes and businesses is also possible as rats and mice leave their urine and droppings behind and infiltrate food sources. They could even bring in ticks or fleas that can carry numerous diseases as well.

These rodents not only cause health problems as they can also be very damaging to homes and commercial spaces. They basically eat whatever they can sink their sharp teeth into, such as wood, cardboard, electrical wiring and insulation.

Exposed wires that they leave behind might even cause house fires. Scary, isn’t it?

Get Help With Rats Or Mice

Norway rats, or also called brown rats, are among the largest rat species that can grow at a maximum of 10 inches excluding the tail. If one female Norway rat finds its way into your house or establishment, you might end up dealing with lots of baby rats before you even know it.

Norway rats tend to produce as much as 5 litters in just one year and every litter has an average of 7 baby rats! Just imagine how damaging a female Norway rat can do if she finds a spot in your attic or storage room.

These rats are known to carry Hantavirus pulmonary syndrome, Q fever, Well’s disease, viral hemorrhagic fever and cryptosporidiosis. Norway rats are incredibly adaptive to their environment. They are considered among the most aggressive and difficult to control out of all pests.

This is why it is important that you get the help of an expert and professional pest control company in Dublin to help you say goodbye to Norway rats in no time.

Smaller than rats, house mice can measure up to 6 to 7 inches and most of this length is found in the tail. House mice prefer to be indoors where it is cozy and nice instead of the outdoors. This is why it can be very challenging to try keeping them outside your premises.

Female house mice can breed all year round with large litter with as much as 14 babies. To make things worse, these babies can start breeding as soon as they are 5 weeks old. This means that it is very easy and fast for a house mouse infestation to get out of your control. They love living near humans and they go around spreading diseases and contaminating sources of food.

Probably the only good thing about house mice is that they don’t tend to be very aggressive and will bite only if threatened. And even if this happens, their teeth are not large enough to cause a break on the skin. This is what makes them less threatening than rats.

Dealing with Rodents in Dublin?

Needless to say, it is never a good thing to have these pesky rodents to find their way and set up camp inside your home or business space in Dublin. All of them can spread diseases and cause extensive damages to homes and establishments and everything found within them.

If you ever suspect that you are dealing with a mouse or rat infestation, make sure you contact a Dublin pest control company right away that can help you deal with these rodents before things go out of control!

Get A Rat & Mice Control Service

PrevPreviousMandatory CPD Scheme for Pest Controllers in Ireland
NextIdentify and Get Rid of Pests in your HomeNext
We use cookies on our website to give you the most relevant experience by remembering your preferences and repeat visits. By clicking “ACCEPT ALL”, you consent to the use of ALL the cookies. However, you may visit "Cookie Settings" to provide a controlled consent.
Cookie SettingsREJECT ALLACCEPT ALL
Manage consent

This website uses cookies to improve your experience while you navigate through the website. Out of these, the cookies that are categorized as necessary are stored on your browser as they are essential for the working of basic functionalities of the website. We also use third-party cookies that help us analyze and understand how you use this website. These cookies will be stored in your browser only with your consent. You also have the option to opt-out of these cookies. But opting out of some of these cookies may affect your browsing experience.
Necessary Always Enabled

Performance cookies are used to understand and analyze the key performance indexes of the website which helps in delivering a better user experience for the visitors.

Analytical cookies are used to understand how visitors interact with the website. These cookies help provide information on metrics the number of visitors, bounce rate, traffic source, etc.

Advertisement cookies are used to provide visitors with relevant ads and marketing campaigns. These cookies track visitors across websites and collect information to provide customized ads.

Other uncategorized cookies are those that are being analyzed and have not been classified into a category as yet.

SAVE & ACCEPT
Powered by