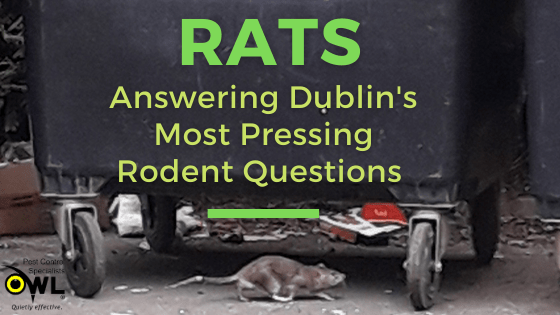 Rats have been in existence for probably as long as mankind has. These rodents manage to survive in this world with their ability to constantly adapt to the changes occurring around them.

With humans becoming the dominant species on the planet, rats also started to change their behavioural patterns and target homes and man-made structures to find nesting places, warmth, and food.

The big problem is that these animals often bring with them a plethora of issues and this is why they are often considered unwelcome visitors and uninvited guests.

Local authorities have actually reported a 25% increase in rodents activity in 2020. If you think that your home or business has been infested by rats, it is important to call pest control experts in Dublin to solve the problem before it goes out of hand.

To give you a good idea of how to deal with these pests, here are the answers to the most pressing rodent questions of Dublin residents:

A rat looks like other rodents such as mice. Its similar appearance to other rodents is the reason why there is often some confusion over the specific type of pest lurking in a home or building. The appearance of rats varies a bit depending on the particular rat species being discussed.

What are the Common Rat Species in Dublin?

There are actually two main rat species found in Dublin. The first one is the brown rat or common rat and the second one is the black rat or ship rat that is already quite rare today. Rats are common pests in businesses and private homes alike. The brown rat is bigger, with a fully grown one weighing about 400 to 500 grams. The weight of the black rat is about half of that of its brown counterpart.

What Do Rats Feed On?

Rats don’t have any particular preferences when it comes to the food they eat. Even when living in the wild, rats are opportunistic feeders. This is also dependent on if they live in cities or urban environments or in rural and wild areas.

What rats eat also depends on the particular species in question. For instance, since the black rat is a tree-climber, it has a tendency to be somewhat more vegetarian. They prefer to feed on fruit, vegetables, and nuts. They also like berries as well as other fruits although there are times when these rats also eat smaller invertebrates and snails.

Rats living in the wild also eat nuts, seeds, and fruits. They will eat anything they find or gain easy access to. This is why if you leave out food for your pets, you might see rats as they try to access seeds, grains, and other types of food.

Rats living in an urban area will feed on meat scraps and pretty much anything else. It explains why they like chewing their way through your house walls just to get inside. They are searching for easier access to food and the pantry of a house filled with food they can conveniently get their paws on. They will be more than happy to munch on vegetables, fruits, cereals, and meat accessible to them.

It is common to see rats in cities, specifically around garbage cans and dumpsters. People often throw out most of their food scraps and rats will never be shy to eat these for survival.

As for the reason why rats often come out during night time, it has something to do with feeding. Since these animals are opportunists, rats come out at midnight as needed. However, there are also rats that prefer feeding at dusk and before dawn.

Where Can You Commonly Find the Nesting Places of Rodents?

When searching for the nesting sites of rats, remember the following things that these animals like:

Rats constantly search for food and want it as close to their nest as possible. Rats have poor eyesight and they don’t like wandering too far even if they do if food is sparse. These pests maintain a limited perimeter from their nest where they look for food.

Rats search for a cosy spot that will offer warmth for them and their little ones. They also like to stay dry during the winter months and rainy seasons and this is why they come indoors in such times.

These rodents use garbage, newspapers, old sheets, paper towels, leaves,  grass,  vegetation, insulation and pretty much anything that will help them create a warm, dry, and soft nest to give birth, raise their babies, and sleep.

What Health Risks Do Rats Bring?

You have probably heard about how rats were the main culprit behind the Black Plague that distressed Europe during the Dark Ages. The truth is that the parasites and fleas on the rats were to blame for the disease. However, the mere fact that these rodents are very prone to different parasites such as ticks and fleas only means that they could bring all of these near you and your whole family. Here are other health risks that rats can bring:

Even though it was more prevalent in the era of the Dark Ages and while there are now treatments for this, the Plague remains to be a serious health risk that comes with rats. Fleas are the ones that carry this disease and they feed on rats before they transfer to humans.

This is a type of virus that humans contract once they are in close contact with rat saliva, faeces, or urine. It can be deadly to humans and may cause kidney or renal failure.

It is a bacterial disease and in humans, it can cause a central nervous system infection. This can be risky to pregnant women and can be a risk to people with compromised immune systems.

Rats that have ticks make Lyme disease a serious risk to humans when ticks bite them, leading to serious and long term health problems.

Rats as well as other rodents are susceptible to rabies. This can attack the nervous system and cause aggression and foaming at the mouth in animals and people alike. If untreated, this can result in a protracted, painful, and long death.

There is a belief that the main reasons behind respiratory illnesses among residents of cities is the presence of rodents. The faeces of these animals can dry out, turning into dust that spreads all over the house, affecting the lungs. Rat dander can also cause allergic reactions in people with respiratory illnesses.

This is a type of serious bacterial infection that gets passed along by the parasites like fleas and ticks that can hitch a ride on rats entering your home. This is an umbrella term covering numerous bacterial diseases like typhus.

Most popularly known as a form of food poisoning, it can get transmitted because of rats that interfere with food and areas where food is prepared. Since rats are infamous for being unclean as they live in sewers and root through garbage, they easily transfer different bacteria such as salmonella to surfaces for cooking and it can cause sickness in people.

Often linked with cars, rats also serve as a vector for this specific illness. It doesn’t cause anything serious for most people but for patients with weakened immune systems or cancer, the disease tends to be very dangerous.

How Do Rats Get Inside Homes?

Rats can get inside your home using any crevice or crack, cavity walls, or sewer defects. Black rats can also use sewers just to get inside if the need arises.

Once rats find their way inside your house, it is recommended to contact professional pest control since even just two missed rats can soon breed, resulting in another infestation. It is also impossible to reach and find rat nests within crevices and walls in basements and attics. Getting rid of these rodents once they built a nest indoors is difficult but you can still do something to prevent rat invasion.

You can get rid of vegetation around your house to prevent rats from coming near or entering your home. Make sure that you also clean your property and remove garbage and paper to discourage rats from building their nests around your house.

Always keep your garbage and food sealed tight and dispose of them right away when needed. Finally, don’t forget to inspect your entire property. Patch up any cracks in foundations and cement that rats may use for getting access inside your home.

Take note that rats can easily compress down their bodies into narrow sizes to squeeze through even the most impossible holes and crevices. Replace damaged roof tiles and repair any holes in your roof as well to prevent rodent access.

Never delay dealing with rats and other rodents. Instead, make sure you contact pest control experts in Dublin right away for you to say goodbye to these pesky pests for good!

Book a Rodent Control Service
☎ 014523680
More info about rodents...
PrevPreviousSilverfish – Amazing Facts You Need to Know
NextWasps – Should You Use a Professional?Next
We use cookies on our website to give you the most relevant experience by remembering your preferences and repeat visits. By clicking “ACCEPT ALL”, you consent to the use of ALL the cookies. However, you may visit "Cookie Settings" to provide a controlled consent.
Cookie SettingsREJECT ALLACCEPT ALL
Manage consent